Future Cinema held a Valentines spectacular, showcasing Who Framed Roger Rabbit at the Troxy. The event opened on Valentines day and runs until February 23rd.

Just a few minutes walk away from Limehouse station you step in to an immersive cinema experience as soon as you join the que. Who framed Roger Rabbit is almost 30 years old and is a timeless film. I must’ve watched it half a dozen times when I was little and although remember iconic moments and characters such as Jessica Rabbit, there was a lot I had completely forgotten! This is where Future Cinema steps in and transports you back to 70s Brooklyn,capturing the feel of Who Framed Roger Rabbit perfectly. 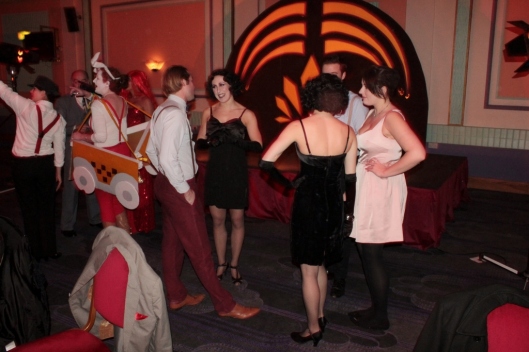 As you wait to go into the Troxy, the weasels are there jumping in and out of the crowd making jokes. You are met at the entrance by someone who shakes your hand and acts as if they have known you for years but the stand out moment is when you enter the Troxy and pass through the red curtain and see that the Troxy has been transformed into the ink and paint club to perfection. White tablecloths cover over 100 round tables; there are several mini stages in places throughout the ground floor. At the front is a long narrow stage with a microphone for the performers whilst at the back is the cocktail bar serving cocktails such as the Jessica Rabbit which consists of vodka, raspberry puree, topped with Prosecco. Not forgetting the incredible food bar serving hot dawgs, pulled porker and beef in a bun. 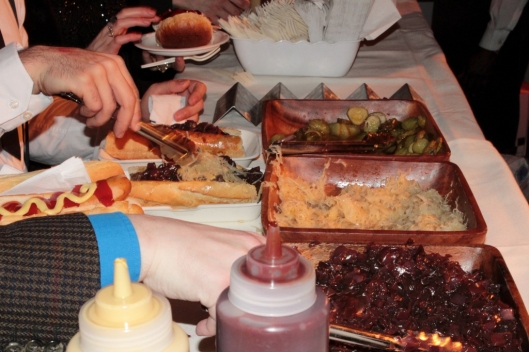 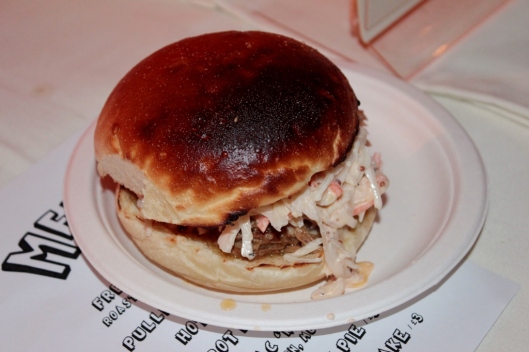 END_OF_DOCUMENT_TOKEN_TO_BE_REPLACED

Last Thursday opened my eyes to just how delicious pulled pork can be! This was because I went to Duke’s Brew and Que which is an incredible deep southern inspired restaurant and brewery based down in Dalston. The menu offers a wide range of different ribs from free range pork, smoked over hickory and apple cherry wood to Irish beef from county Moneghan. If you can’t decide what to go for there is Duke’s Greatest Hits (BBQ Platter) which consists of One Beef Rib, Pork Rib and Pulled Pork. Served with coleslaw, pickled red onions,  BBQ sauces & Texas Garlic Toast.

I had a good ol’ look at the menu a couple of times before heading down and was convinced I would order ribs but as soon as I saw the burger whizzing by me I knew I had to have it. Pulled pork in a big brioche bun served with chips and red onion, it had to be a winner. And it most definitely was! The last pulled pork burger I had was from the Wenlock and Essex which was a beef burger with pulled pork on top and although absolutely delicious I think Duke’s Brew has knocked them off the top spot!

Craig meanwhile went for the platter. At just under £25 it’s quite pricey but it consisted of so much that he struggled to finish it. The meat on the pork rib fell off the bone and was his favourite, however the beef rib, whilst humongous, was a bit tougher from the fire.

The atmosphere and friendliness of the staff made the experience that extra bit special. When deciding on what drink to go for our waiter came over and offered a tasting menu where you can try the different types of beer and ale. The best one was the chilli and lime as it was a lighter ale with an extra kick.

Although full from the mains I could not leave Duke’s without trying a dessert. Two were calling out to me but if we were only going for one we knew it had to be the peanut butter and chocolate tart with honeycomb and praline ice cream. This was insanely delicious. I am such a chocolate and dessert lover and recently when dining out I must admit I’ve struggled to find a dessert that has wowed the taste buds but this dessert once we managed to break into it (be warned it’s a bit of a beast to cut into) was full of flavour, absolutely addictive and left me wanting more. The peanut butter and chocolate worked incredible together combined with the popping crunchy texture of the ice cream. I recently made Lorraine Pascale’s peanut butter slabs which I loved and this dessert reminded me of those but not as rich. We shared the dessert and after I loved it so much I was tempted to get another but the swollen belly I had two hours after was probably a telling sign that one was enough. 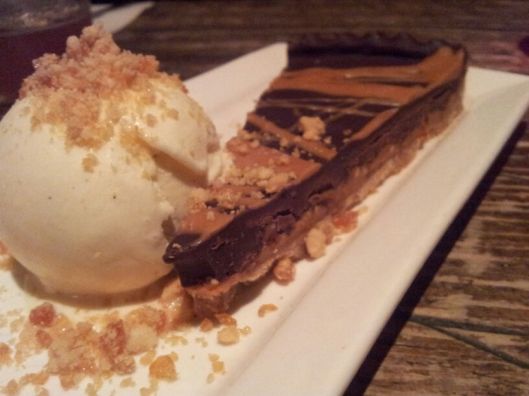 I would highly recommend Duke’s Brew and Que if you’re in the mood for some proper american influenced food. The laid back vibe and superb service ensure you’ll have a great night, just make sure to leave room for dessert!