No autumn is complete without the BBC Good Food Show. It’s one of those annual events you look forward to months before it even happens. When I was on the train on my way to the show there were so many mums with their daughters, families together, happy and excited on their way to the event.

Held at London Olympia, this was my third time at the BBC Good Food show and I loved it just as much as the first time going. I remember thinking right we’ll just go for two hours and that will be plenty. Five hours later we were still there! Olympia is huge and with over a hundred stands you can’t just whizz around it, well you can but then find you want to whizz around it five more times. 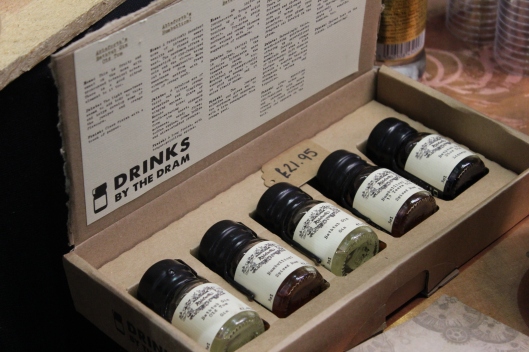 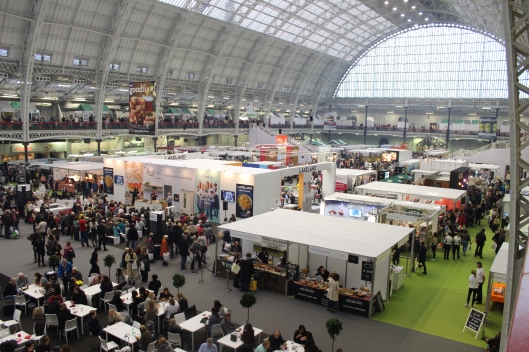 I went with my friend Sarah who has never been before and had no idea what to expect and she absolutely loved it.

As soon as we walked in we were greeted by the amazing smells from Heck sausages, to our right there was a huge display of incredible looking peanut fudge squares from Narnas Cakes and to our left we tried wonderful samples from Perkier, amazing healthy and nutritious breakfast bars – the new coconut and chia quinoa bar was a favourite. 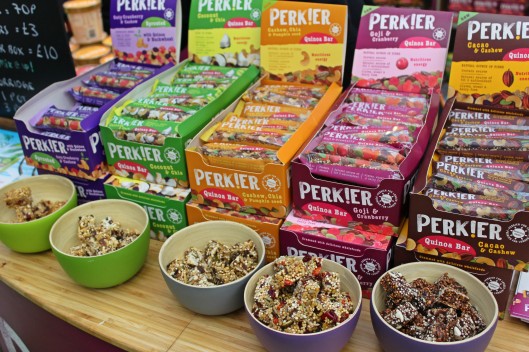 We spent three hours alone on the bottom floor, sampling varieties of olive oils, tapenades, teriyaki chicken, ice cream and chocolate spread. I finally picked up two tubs of milk chocolate and hazelnut spread from Jim Jams. I have always got to his stand too late in the day and his produce is gone so today I managed to get there in time.

We came across Judes which had the best peanut butter ice cream I have tasted as well as a gin and tonic flavour and their new brown pecan butter flavour. We also loved the Colgate stand as you were asked to test the toothpaste on your teeth and then got given a decent sized cup of nitrogen ice cream. We had the vanilla and it was incredible.

Other stand out stalls were:

Amu Chnadra (founder of Ishara Organic) and his family have produced some incredible products from Sri Lanka and were at BBC Good Food show selling the best coconut oil I have come across, coconut cream, sugar and some delicious coconut water. His mum had made an incredible sweet coconut rice dish using the ingredients which ensured we came back a few times for more samples! I took some coconut oil home with me and have already used it to make soup and as a make up remover plus moisturizer and it is absolutely wonderful.

Thistly Cross Cider was established as a collaboration between farmer, Ian Rennie, and artist-turned-cidermaker, Peter Stuart, in 2008. They take care over each step of the cider-making process; from pressing the apples and fermenting with the finest blend of Champagne yeasts, to maturing the cider for at least 6 months to achieve that rounded, smooth Thistly Cross taste.  I had a great time at this stand sampling all the ciders! My two favourite and the ones which came away with me were the Whisky Cask Cider 6.9%,  a flavoursome cider made potent in the oak of a Glen Moray whisky cask as well as the Elferflower cider 4%. Thistly Cross spike their base farmhouse cider with real elderflowers which bestows a rich, complex flavour laced with fruit notes.

Ever get half way through peeling a potato and you’ve scraped more of your finger off than the potato skin? Well fear no more, Kisag Trio peelers are the perfect solution to not only peeling your potatoes and vegetables but it acts as a spiraliser and garlic crusher too! I had a spiraliser last year and did love it but it could be an absolute pain to wash up. This peeler is small, light and does the same thing as a spiraliser. As soon as I saw it I thought it was amazing and when I found out it cost only £5, well it was a winner right there.

JBE Imports are a UK Importer and Distributor of premium spirits. They first started importing in September 2013 and launched Cuban Favourite of Ron Cubay Rum, followed by Palma Cristal and Cubanero Beers. Since then they have branched out and now offer the Arctic Vodka and Gin brand, Isfjord, as well as the best whisky I have ever tasted, Tomahawk Maple Whisky. Hailing from Canada, this whisky is smokey in flavor and silky smooth to taste. I couldn’t leave without it and ended up buying a bottle as well as spending at least 45 minutes at the stand sampling their amazing rum and gin. The rum was extra special mixed with their chilli ginger beer.

I was first introduced to The Original Pizza Company back in September at an event with The Food Sauce and it is one special product. I’ve never seen an appliance that can make pizza, and pretty tasty pizza at that, so quick! The Original Pizza Maker is a small electric appliance designed to sit on your kitchen worktop or table.

With the interchangeable stone base and a pure ‘firestone’ cooking bed, The Original Pizza Maker delivers an intense heat which absorbs any moisture. This ensures your pizza has a crisp base right from the centre to the crust. Not only does the original pizza maker make pizza but due to the interchangeable non-stick deep dish pan it can also make muffins, omelettes, cake, vegetables, pancakes plus many more. For £109.95 it’s a fantastic price for an appliance you can use over and over again and even host your own pizza party! 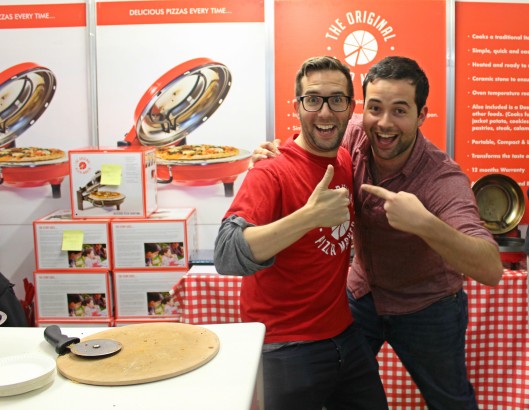 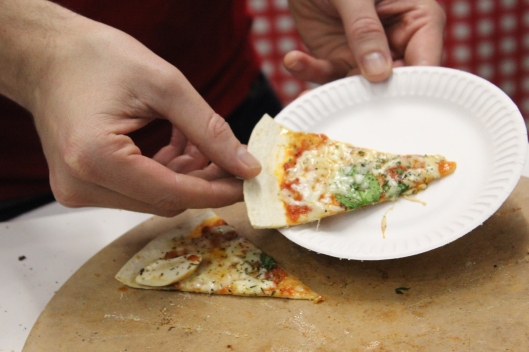 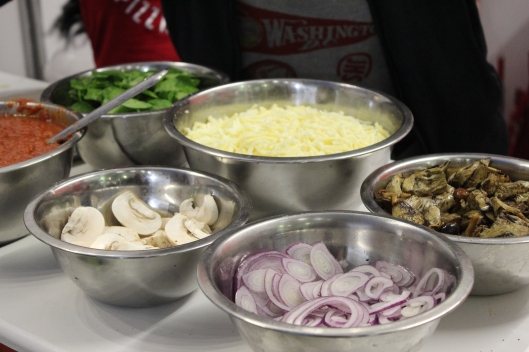 I visit this stand every time I go to a BBC show and it never disappoints! This time I came away with a nutella & peanut butter brownie (amazing!) and my favourite peanut butter brownie bomb (they sound similar but are quite different and both super delicious!). Sarah was the one who spotted the stand and was blown away. She bought four brownies which she told me her husband scoffed down in the space of an hour the following day.

Aldi were sponsors of the supertheatre this year and boy did they have a good stand! Sarah and I were so impressed we must have visited it at least 5 times particularly for the delicious truffle nuts and the prosecco!

You couldn’t buy any of the produce, which was a shame, as I would have definitely purchased a few bags of nuts and a bottle of the prosecco seeing as it was only £7.49 but it was lovely to be able to sample so many different items from Aldi and be so impressed at the quality. Thankfully the nuts are in the shops from this week. I just need to find my closest Aldi now!

When I lived in Vancouver I got a bit addicted to this amazing chai milk drink and have been searching for something similar since I came home but to no luck. Well thank goodness for Teaforia as they have a drink that is practically the same. Inspiration for Teaforia ground tea came from history and the Buddhist monks in Japan who made their tea by steaming, drying and grinding tea leaves that would then be diffused in water instead of brewed. Fascinated by making tea this way the team behind Teaforia started to experiment by grinding tea leaves and mixing in other natural ingredients producing some very interesting flavour combinations along the way and thus Teaforia was born! Our two favourites were the Latika Chai Latte Gourmet Ground Tea and the Kyō Matcha Latte. Unfortunately due to carrying so many bags I think I dropped it on the floor which was really disappointing but I won’t waste any time buying another box.

I could go on and write about at least twenty more stands but this post would most likely get too long for anyone to read therefore I will finish off with saying that the BBC Good Food Show is one not to be missed! Sarah and I made a joke about the day that we were perfectly timed for everything as we would just happen to pass a stand when the sausages had just been cooked or pass when a sample cheesecake had just been delivered but I think this more demonstrates just how efficient and customer focused everyone who takes part in and works at the BBC Good Food show is. Our favourite part of the day was, just as we were about to leave and didn’t think we could fit in another morsel of food, we just happened to be standing in front of the Japanese Wagyu Beef stand and were offered two sample plates. Well we definitely weren’t going to throw them away and it ended up being the most tender flavoursome beef I have ever tasted. I also learnt that this is extremely expensive in restaurants so the fact we got to try it was made even more special.

We went home with bags full of produce, full tummies and tired legs, definitely signs of a wonderful day.