Last night The Gastronome allowed people to travel back in time to the 1950’s and enjoy a night of fine food, old fashioned bourbons, poetry and swinging music. Held in an old converted gas station, the event Kerouac Shack was a special one off supper club curated by the gastronome himself, Joseph Curtis.

Having spent the day at Cake and Bake Show (amazing as always) I wasn’t sure if I was going to be able to stomach a five course meal, and I can admit I’m still suffering slightly (mainly from the old fashioned bourbons) but it was absolutely worth it. As soon as I stepped through the doors of the garage it was like being transported into a secret gem of a place and different era entirely. Most people were already sitting at their long tables which consisted of 6 people to one table by the time I arrived. A small shot glass of what I thought at first must be some alcoholic beverage was given to us as soon as we sat down and which we found out was Amuse Bouche, a cold pea creamy soup which was  thick and delicious.

Each table had one bottle of white and red wine and upon going to the bar we were given an old fashioned bourbon which is one of the tastiest drinks I have discovered but also the reason for a pretty sore head today. The drink takes approximately 8 minutes to make and were extremely popular so several were made up in advance to avoid waiting time. Next to the bar the chefs openly cooked and prepared the food which I was in awe of as they managed to cook and present everything so beautifully. 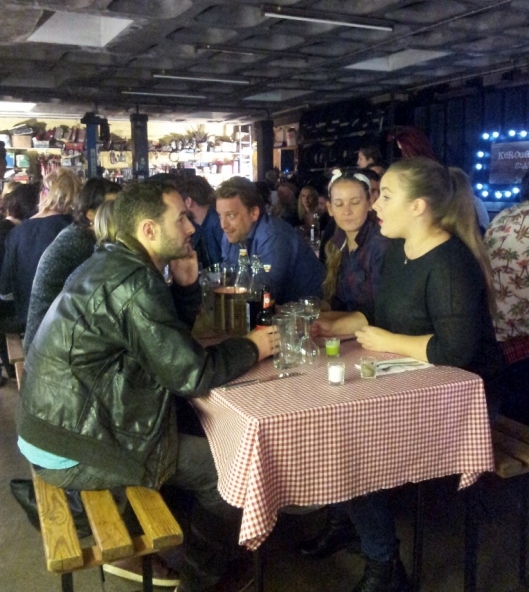 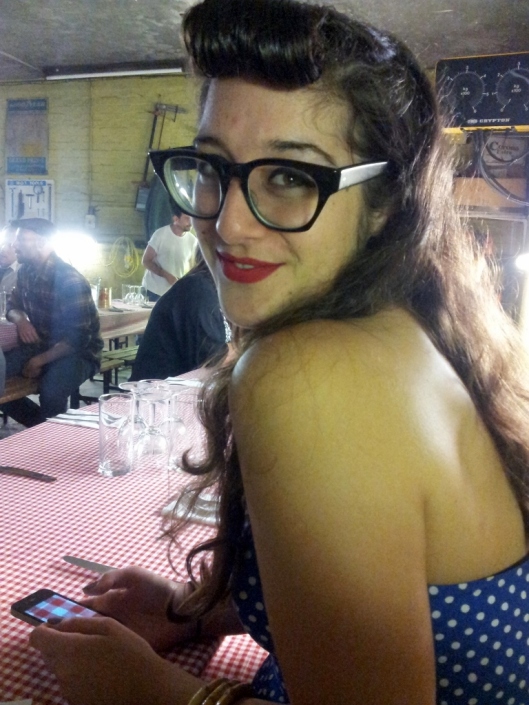 To start there was the option of Spiced confit chicken leg or Truffled wild mushrooms
with Sweetcorn puree and pea shoots followed by either the Grilled Bavette steak or vegetarian option of Squash and allium Wellington with mac’n’cheese, watercress, pickled shallot and peppercorn sauce. I decided to go for both meat options and was not disappointed. The chicken was tender, slightly spiced and was simply heaven in the mouth mixed with the sweetcorn puree. How have I never had it before? I easily could have eaten it out of a jar with a spoon, it was delicious. I found myself feeling the same way when the main course arrived as it combined two foods I don’t eat very often, steak and mac n cheese, yet the combination worked beautifully together with the steak cut into strips and bedded on the mac n cheese. 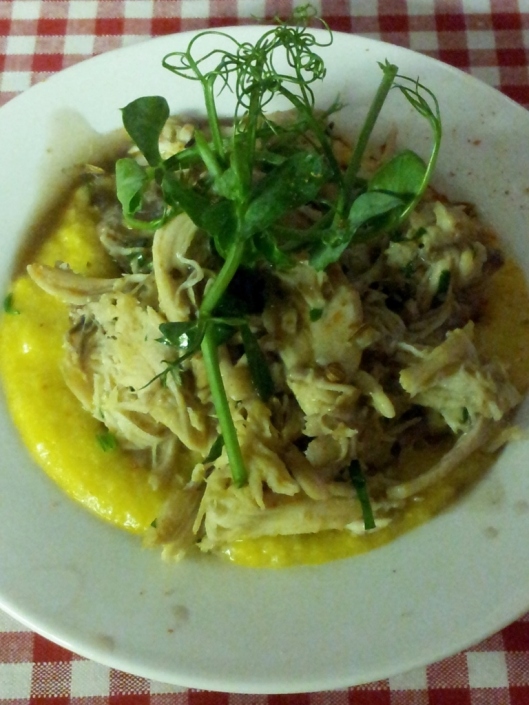 By the time dessert had arrived I was feeling contented and also quite merry so the orange and bourbon granite just added to this followed by the blueberry cheesecake. I heard mixed reviews about the cheesecake and I would also agree I enjoyed the savory over the sweet on this occasion however I still managed to have my own as well as half my friends too so I wouldn’t say it was disappointing at all, quite the contrary.

Nights like these are such a fun way to enjoy a new culinary adventure, meet people and not only discover exciting edible experiences but music too. Last nights bands were incredible especially the all family band, Kitty, Daisy and Lewis who played traditional rhythm and blues and hillbilly swing and had people up on their feet dancing.

At £50 a ticket the price might seem high at first but for what you get for the money it is definitely worth it. A five course meal, plenty of drink and thigh slapping music this was one fabulous foodie event I thoroughly enjoyed and will be looking into more edible experiences to take part in and discover in the near future. 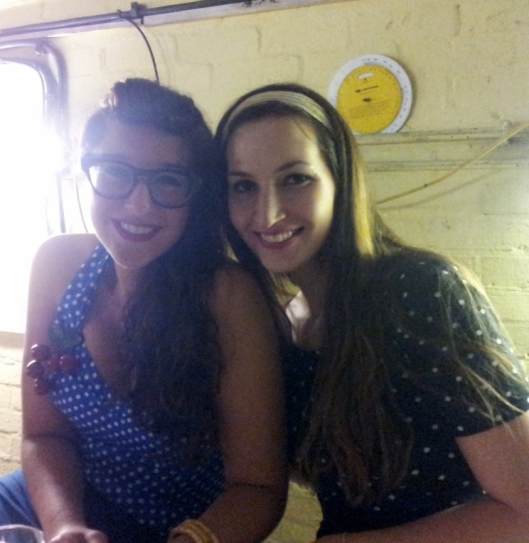