As you can see I’m a bit late with the posting considering I’m posting about a cake designed as a pumpkin and we’re now into the beginning of October but it’s still kind of Halloween spirit right? Fireworks are still happening and as long as there’s pumpkin on the market then making cakes using them can never be too late.

I actually made this cake not for a Halloween event but for October’s Cake Club ‘Cake Catwalk’ event. Since being completely blown away by the sheer awe inspiring talent of cakes displayed along a catwalk at the Cakes & Bakes show last year I have been meaning to create one that could test my skills when it comes to cake decorating. I love nothing more than looking at cakes and admiring other people’s work but I also wanted to give it a go, and give myself enough time to spend decorating and thinking about a ‘catwalk’ cake.

As it was October and drawing close to Halloween I immediately thought about baking a pumpkin cake and therefore searched the net for some inspiration. There were some incredible cakes at the Bakes & Cakes show that I went to the Saturday before. I especially loved the Tim Burton inspired corpse bride cake with the beautiful twisted black tree down the side as well as some mighty impressive ones from individuals as young as 8! (I’m guessing some parents might have given a helping hand in the making there but oh well!)

The cake I decided upon was a there tier pumpkin cake. I had previously made some lovely, light pumpkin passion cupcakes at my brothers 30th and therefore decided to use the same recipe. I’ve never used a recipe meant for cupcakes to make a 20cm round cake before so was a bit anxious as to how it would turn out. Thankfully it baked through, although it could’ve been slightly springier. It did feel quite heavy and although tasted lovely when I make it again I will either:

For the filling I used a simple soft cheese buttercream rather than the meringue frosting I used previously and then decorated the cake with some Renshaw Sugar Paste. I haven’t worked with sugar paste since doing a cupcake decorating class at The Make Lounge which has unfortunately closed down now but it is so much fun to play with. I used white sugar paste and simply added a little dye to give me the different colours and then quickly moulded it into the shapes I wanted. The sugar paste gets hard very quickly so it’s best to roll it into the shape you want straight away and make any dents/details/marks into it to get it to the design you want.

2. Stir in the cinnamon, flour and bicarbonate of soda, the mixture will be quite wet. Spoon two thirds of the mixture into the 20cm baking tin and bake for 25mins. Insert a skewer into the cake and if it comes out clean it is cooked, if not leave in for a couple of minutes longer. Cool completely on a wire rack. 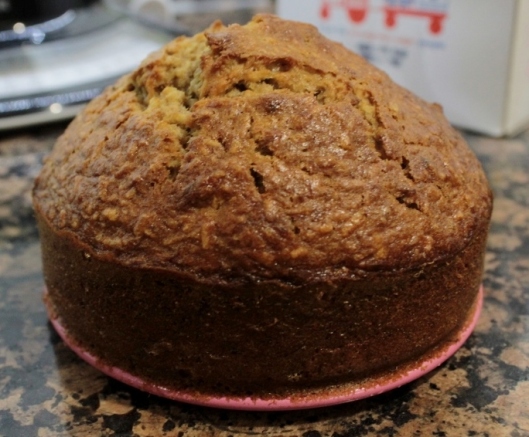 3. Meanwhile separate the remaining mixture into two bowls. Put two thirds in one bowl and add one mashed banana to the mixture and combine together. Pour into 18cm baking tin and bake for 25mins. The banana makes the mixture wetter therefore needs longer to bake.

4. For the top tier add 30g dessicated coconut to the mixture and stir together. Bake in the oven for 18-20 minutes. If skewer comes out clean it is cooked, if not leave in the oven for a few more minutes.

5. To make the frosting, beat the cream cheese and sugar together until smooth then spread on top of the cupcakes. (Tip I would leave the buttercream in the fridge to get a little harder before putting on the cakes as found mine melted a little and therefore when putting the pumpkins and leaves on the colour ran into it)

6. For the pumpkins and leaves use sugarpaste to shape into balls for pumpkins and a flat thin instrument to make indentations on the ball to create lines of the pumpkin. For the leaves, shape them how you want them to be and then use the flat instrument to draw in the lines. (Tip: Don’t put sugarpaste in the fridge- this is something I have definitely learnt for next time– as it will start to melt and colour will come off) 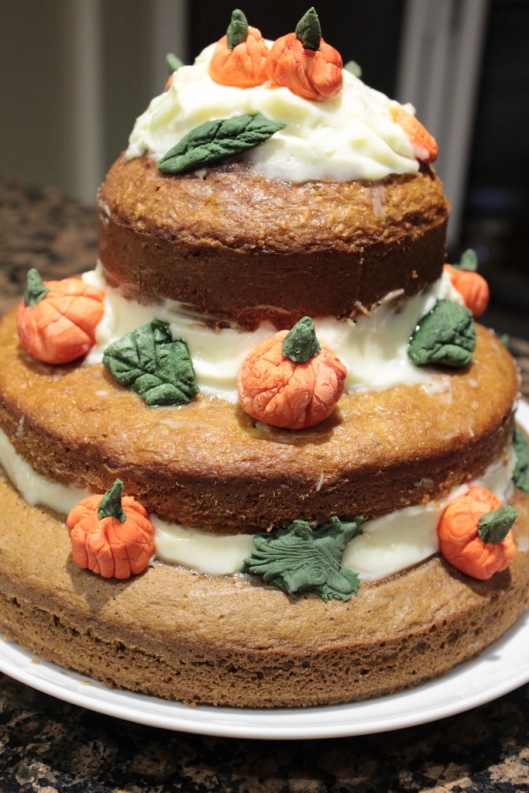 There were some incredible and impressive cakes at Cake Club including a Mac designed lipstick cake, a coconut rum Hawaiian t-shirt and a beautiful light and airy chiffon cake. You can have a look at these and have a peek into our night from Jelena’s write up here.

I spent most of my Sunday making the cake but absolutely loved doing it. I’m excited already for next month’s Chocolate Divine theme for Cake club as well as just finding more excuses to do baking and decorating again.