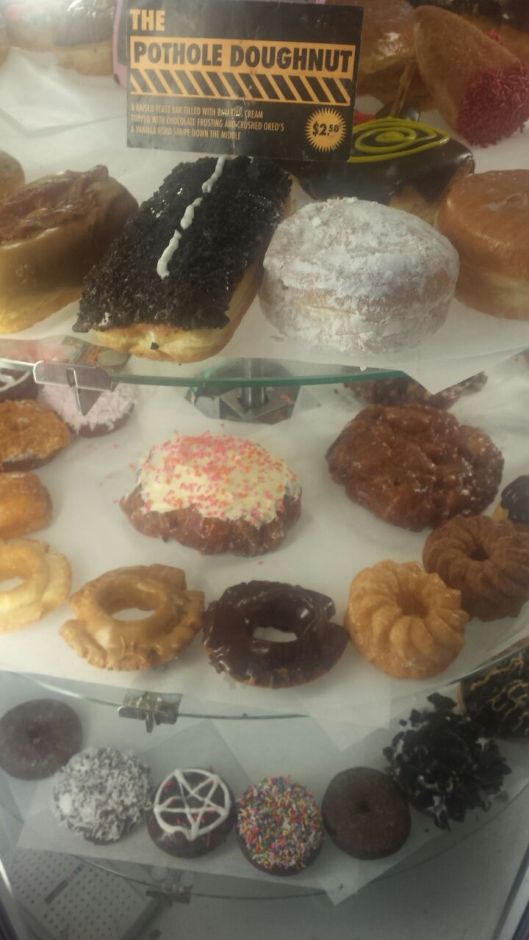 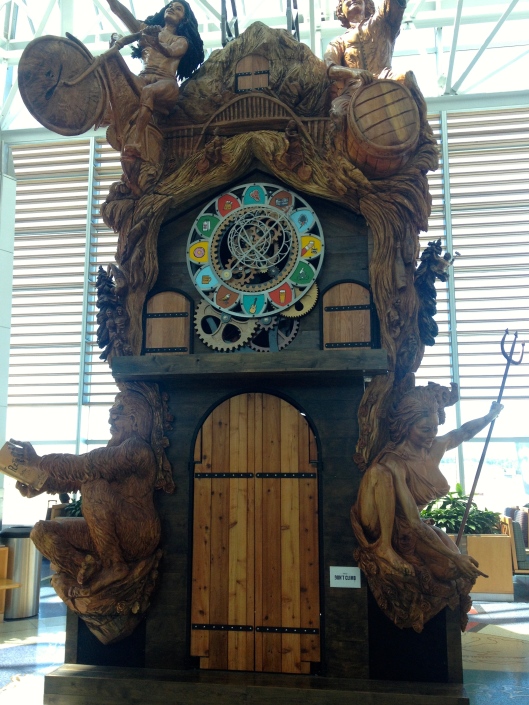 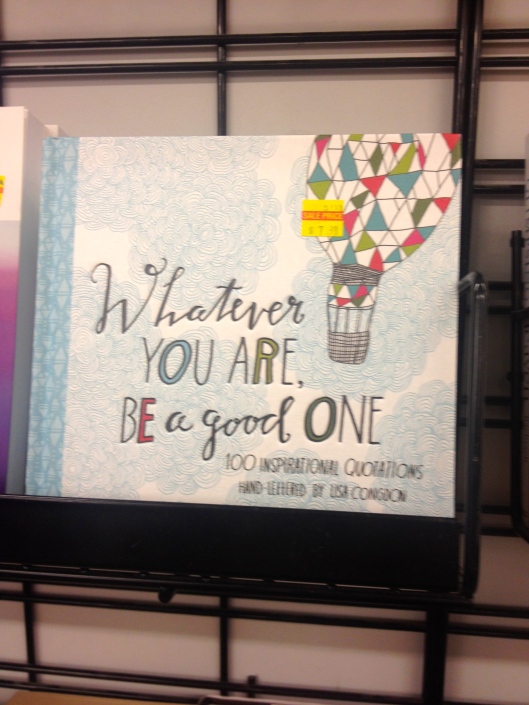 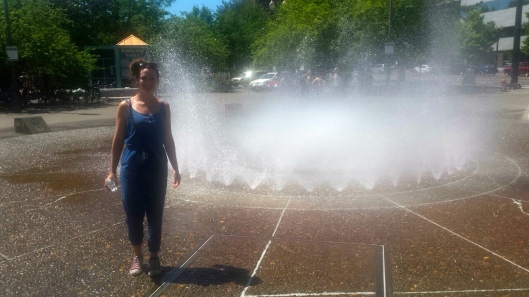 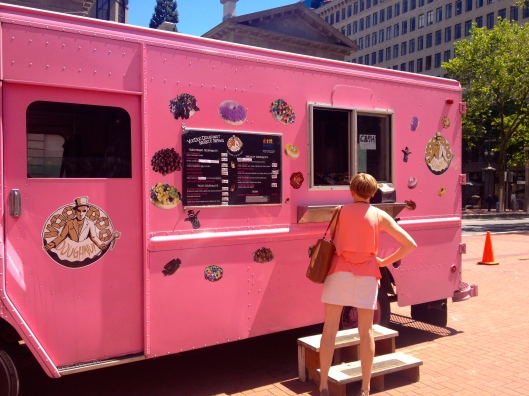 Next stop for our adventure was Portland Oregon. I didn’t really know what to expect from Portland, I just remembered a chat I had with two people in my first week at the hostel where they had said it was definitely worth a visit. We had an early start as our flight was booked for 9a.m. Again we arrived at the airport about 45 minutes too early but it was fine as we sat and got a filling breakfast. The flight was so quick and before we knew it we had landed in Portland at 11a.m. The weather was a scorching 32 degrees and was actually really lovely to come back into having been in San Francisco for the past three days. We jumped on the train and went to the city centre where we knew we could drop our bags off in a place called Powell’s before we needed to check in to our air bnb. As soon as we got to Powell’s we both fell in love with it instantly. If I thought the bookshop in San Francisco was amazing this was about eight times the size and was just incredible. The staff were so friendly and accommodating and there were so many rooms and books it was hard to know where to begin. If it had been a cloudy day I know where we would’ve spent the whole day!

As it was beautiful weather however and we were pretty hungry, after a half hour browse we decided to head out for some food. We were really spoilt for choice in Portland, as there are so many amazing food trucks and places to eat. We were both a bit in heaven when we came across a block where there was about 20 food trucks ranging in all different cuisines.

Craig chose his burrito straight off the mark and it was the tastiest burrito I have ever had. I opted for a gyros from an Egyptian food truck, where there was a massive que (always take this as a good sign – well usually!) I went for chicken gyros and the wrap was huge but definitely didn’t go to waste. We then headed down to the waterfront where the rose festival was taking place so there was entertainent, more food and drink stalls and a fun fair. After a look around I thought it would be fun to go on the waltzers but I think it was a bit too soon for Craig after eating the burrito as he almost got sick! We were using the wheel in the middle to make us go faster and after doing it a few times I just saw Craig’s face lose all colour and he literally looked like he was going to hurl! 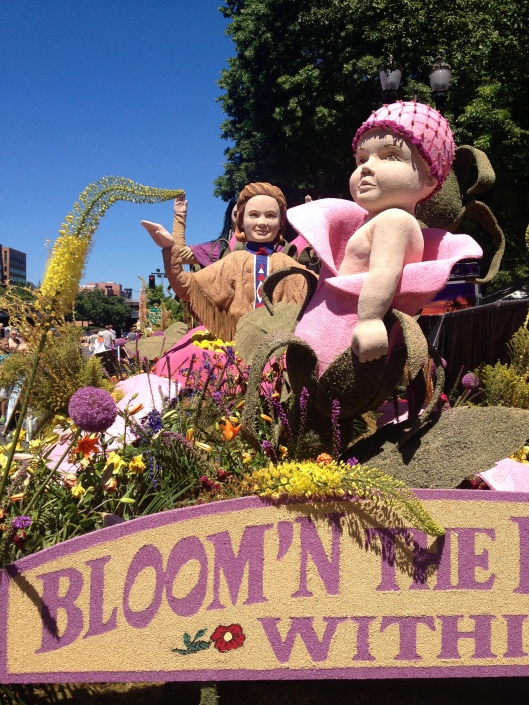 We spent some time looking around the shops and then headed for the bus to go to our accommodation. Unfortunately the directions we were given were wrong so we ended up going too far on the bus and had to wait for the driver to have his break and take us back. He was so incredibly friendly and we noticed this a lot in Portland, there was a really lovely feel to the place and people would usually just stop and chat or if they saw you were a bit lost would ask if they could help. We finally got to our accommodation and were greeted by our lovely host, Tom. The house was gorgeous and the room was decked out with everything imaginable from the latest TV guide printed out to hundreds of guides and books about Portland and places close by. Tom, our host, was a travel agent so he was very well acknowledged in creating a welcoming, comforting environment that met our needs completely. There were even little chocolates placed around the room, loads of bath soap and toiletries, towels and breakfast was included too. He also gave us a good recommendation for where to go for dinner which was located walking distance from where we were in a place called Knob Hill. 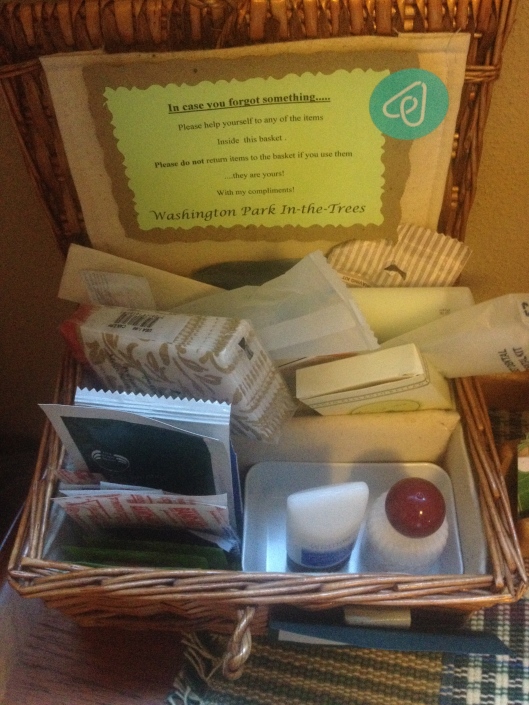 Well we got a bit lost again to begin with and I was suffering from terrible sun burn from my legs as hadn’t put enough sun cream on in the day. However, we finally found Knob Hill and contrary to the name it was beautiful. There were so many lovely shops, loads of beautiful clothes shops, an ice cream shop called Salt and Straw which had a que going back around and down the whole street. We said at the time we would have to come after our food and get one, not realising how much we would eat! There were restaurants scattered along the street. We couldn’t remember the name of the one Tom recommended only that it was a Mexican restaurant so we thought we’d just wander and see whichever one took our fancy. We walked down to the end and there wasn’t one that really stood out. We stopped for a margarita at a place where they were selling them for $3 and I had to ask for some ice to put on my legs. Luckily we also found a shop that sold aloe vera gel so once I had that on my legs they were a million times better. We were starting to think we wouldn’t find anywhere when we saw a lovely wooden restaurant with outdoor seating and decided to check it out. When we looked up at the name it said Matador and we realised it was actually the restaurant Tom recommend and it was incredible. 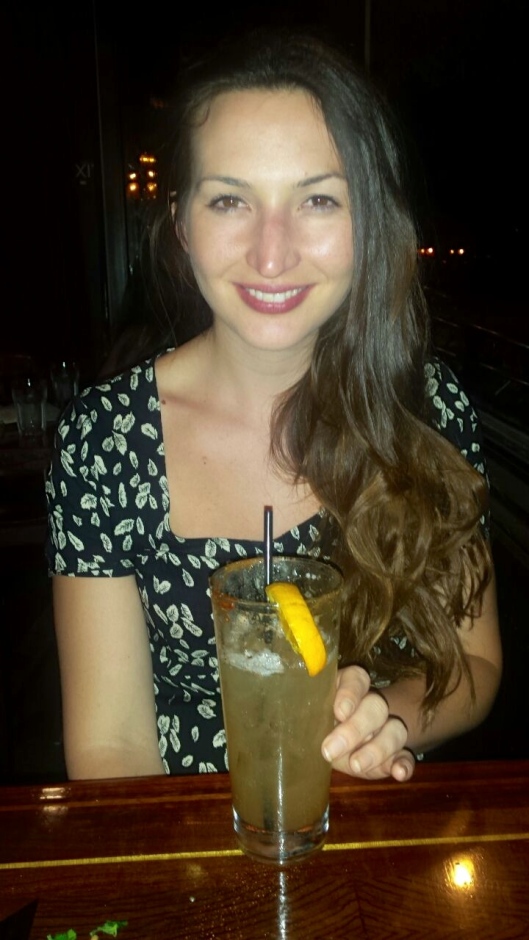 The thing that caught my eye straight away was the goats cheese quesadillas which alone probably would’ve filled me up but as it was a starter I thought I should get another one to make it up to a main dish so ordered the pork. We were given nachos and guacamole to start and I ordered a hibiscus margarita, which was so refreshing, and Craig ordered the top shelf which was super strong!

We tried not to eat too many nachos but they were almost gone by the time our mains arrived. My two starters were huge but so good that even when I was full I would just not leave them alone. Craig order the burrito, for the second time in one day, and we pretty much shared all dishes. We had two margaritas each and then for some reason decided to order tequila, (I blame that one on Craig) and then both just could not even drink it! Craig poured some of his into his margarita but then it was almost undrinkable. 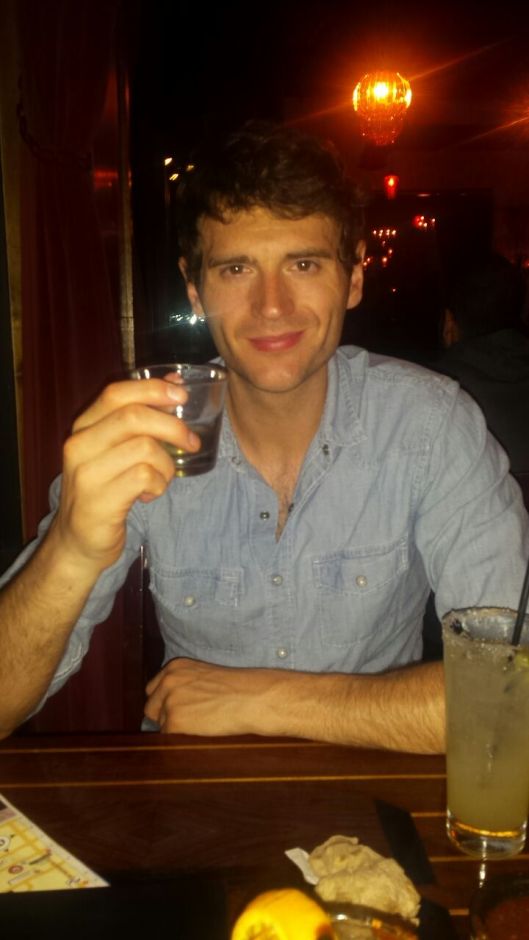 Feeling pretty tipsy we headed back along the street, past Salt and Straw which we could not even think about going into anymore and then out of laziness got a cab back to our lovely b and b.

For our second day in Portland we woke up to Tom chiming away with pots and pans in the kitchen cooking us breakfast. We had eggs, toast and a cinnamon bun with some fruit which was light and just what we needed. He took us down to see the beautiful rose garden which was a lovely treat as he gave us an insider knowledge about how it came about and the different queens they have, the wall of queens. 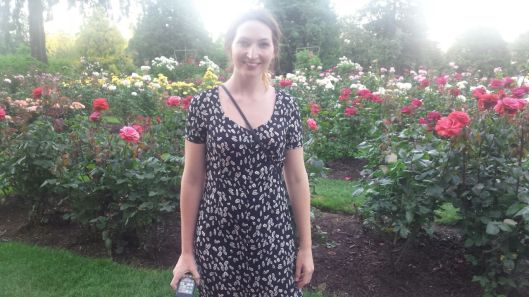 We were in a bit of a predicament because we wanted to check out the Japanese garden but it didn’t open until noon and we had our bags with us. We didn’t really just fancy hanging around for an hour so we thought it would be best to head into town drop our bags off and then we could figure out what to do. We were catching the greyhound to Seattle at 5.00p.m so we knew we could only pack in a number of things and potentially cut out certain others. We decided to go down to the waterfront as we heard there was a trail to do.

We envisioned a beautiful trail to walk along but it was pretty much a pavement near a road! We did come across some a water fountain and as it was such a hot day decided to run through it and our clothes were then absolutely soaked, super refreshing at the time, perhaps not so much after! We then walked along until we got to the aerial tram which although it only lasted 4 minutes, it was really fun to do. We were able to have a really great lookout of Portland and see mountain and volcano in the distance. After doing the ride we had to decide whether we would have enough time to see the Japanese garden. We both wanted to see it but it meant going back on ourselves and we would be pushing it for time. We decided to get some food instead and check out the Chinese gardens, which were closer to us. This meant we got a delicious lunch and also had time to go to voodoos where we got some amazing donuts! I went a bit overboard and bought three however I was jealous of Craig’s choices! However I did steal quite a lot of both of them so it didn’t matter too much. 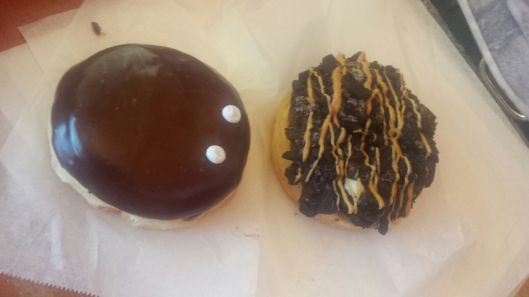 After donuts we headed to the beautiful Chinese garden, which was so peaceful. Amazing how it is located right in the city centre but feels like you’ve stepped into a completely different place altogether. We played a fun fortune game, did a bit of painting and relaxed for an hour wandering around before we headed back to Powell’s to pick up our bags and get the greyhound. Turned out we were pretty early for the bus but it was quite busy so it was probably a good thing. 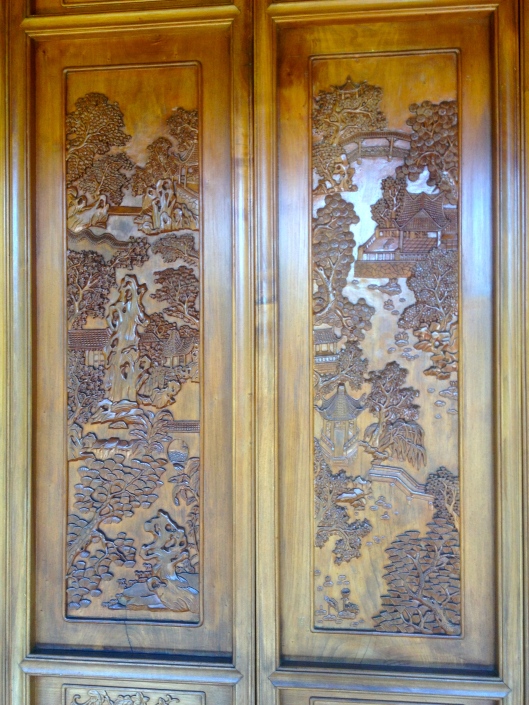 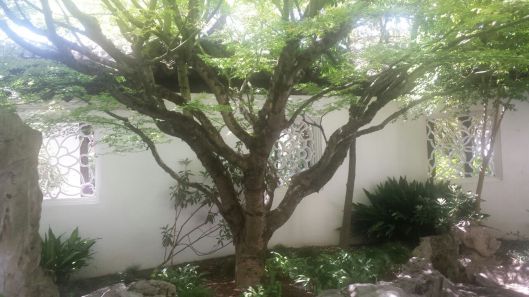 The journey from Porltand to Seattle took 4 hours and we arrived in Seattle soon after the sun had set therefore getting a beautiful view of the skyscrapers. 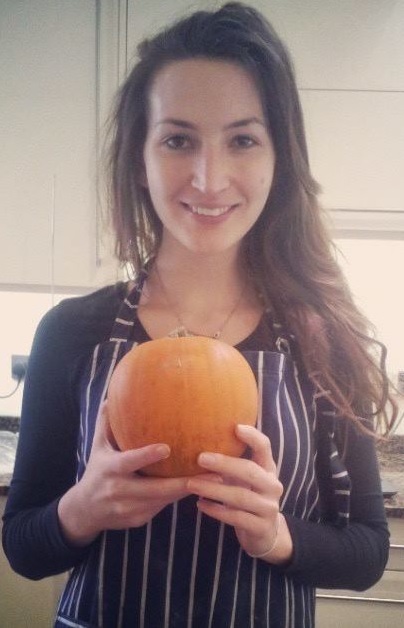